Ronaldinho shines in 4-0 win over Villarreal 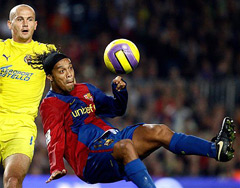 Brazilian star Ronaldinho netted what is already being hailed as one of the goals of the season in Spain when he completed the scoring in Barcelona's 4-0 win over Villarreal at the Nou Camp on Saturday night.

"Ronnie" opened the scoring with a 35th-minute penalty and rounded off the defending champions' victory with a spectacular overhead kick just before the end for his league-leading 10th goal this season.

In fact, the Brazilian controlled Xavi's pinpoint cross with his chest, before sending an acrobatic overhead kick into the back of the Villarreal net, giving Villarreal's keeper Mariano Barbosa no chance to save.

Then, Ronaldinho admitted it was the sort of thing he regularly tries in training, and also revealed one of his other goalscoring hopes.

"I have scored a goal I always dreamed of," he admitted. "I thought about controlling the cross and making it as simple as possible, but the ball was as it was, and I did that.

"There's no doubt, this goal is going to stay with me for life.

"I have always attempted things like that in training, and to invent new things, and it has gone well.

"I have felt a different emotion, with the full stadium and the fans treating me with much affection," Ronaldinho concluded.
Posted by Unknown at 6:06 PM 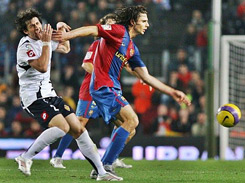 Barcelona got an epic 3-1 triumph over Real Zaragoza in the Nou Camp. Ronaldinho Gaucho was the star of the night, and Rijkaard team is again the best eam in Spain.

But after the match, Barcelona's attack is deserted. Argentines Lionel Messi and Javier Saviola joined Cameroon star Samuel Eto'o in the squad's injury list, which is particularly worrying as they have a busy few weeks ahead.

Indeed, Messi will undergo surgery on Tuesday and will miss the next three months after it was confirmed that he has a fracture in the fifth metatarsal of his left foot. And Javier Saviola in turn will be out of the squad for four to six weeks with a muscle injury in his left thigh.

In just over two months of competitive play, and Barcelona has lost two of the three spikes of its magical "trident" made up by Eto'o, Messi and Ronaldinho Gaucho, a society that gave the club plenty to cheer about last season.

But that was not it. Argentine talented striker Saviola is out of the team just as he emerged as a very worthy replacement in the eyes of manager Frank Rijkaard.

Barcelona president Joan Laporta said Monday that there will be no new signings, so the squad will play for the rest of this year with just four strikers - Ronaldinho, Giuly, Eidur Gudjohnsen and Santi Ezquerro, possibly with the "promotion" of Dos Santos.

The thrilling, tough match against Zaragoza left another injury, since Brazilian defensive midfielder Edmilson sprained his ankle and will miss the action for about ten days.
Posted by Unknown at 8:54 PM

Barza was held by Deportivo in Riazor 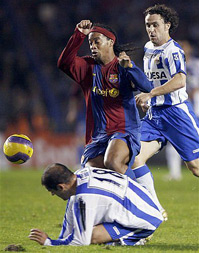 In a very difficult stadium, Barcelona were lucky to escape with a 1-1 draw in their match with Deportivo Coruna on Saturday.

Indeed, once again the European and Spanish champions struggled to find their rhythm in the face of hard-running opponents determined to unsettle them at every chance.

It's good to say that Ronaldinho Gaucho put Barca ahead from the penalty spot just before half-time, but Depor’s unrelenting pressure earned an equaliser in the 73rd minute when Juan Rodriguez scored after keeper Victor Valdes had saved a Fabian Estoyanoff penalty.

The Blaugrana side moved on to 20 points, two ahead of second-placed Sevilla. Real Madrid, who are a point further back, are placed third.

However, they had few sights of goal as a bright and busy Depor hustled them all over the ground.

Deportivo La Coruña stifled their creativity until Barca’s outstanding Andres Iniesta started to make his presence felt and he was involved in the move that led to the first penalty. Home defender Juanma made a late challenge on Saviola at the edge of the area and Ronaldinho sent the goalkeeper the wrong way from the spot.

In fact, the Brazilian was lucky to still be on the pitch at that moment after making a studs up challenge on Alberto Lopo just a few minutes earlier.

Depor’s youngsters never eased off though and were rewarded for their efforts when former Barcelona youth teamer Joan Verdu was brought down by Edmilson in the area.

As we all saw, Valdes guessed right to save Estoyanoff’s spot kick but Rodriguez squeezed the rebound inside the far post.

It's important to mention that a frantic finale saw both sides go close to finding a winner with another former Barca youth team footballer Cristian spurning the clearest of openings.
Posted by Unknown at 7:47 PM

Chelsea got a 2-2 draw in Barcelona 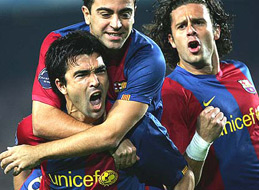 FC Barcelona only got a 2-2 draw with Chelsea in the Champions League, Group A. The English team earned a late draw at Barcelona on an injury-time goal from Didier Drogba. Chelsea have 10 points from four matches and are nearly certain of advancing, with two rounds remaining in the group stage.

Portuguese player Deco gave the defending champions a 1-0 lead after only three minutes on a low shot from just outside the area.

Talented Frank Lampard equalised in the 52nd with a curving shot from the goal line but former Chelsea striker Eidur Gudjohnsen made it 2-1 in the 58th, setting the stage for Drogba’s equalizer.

It's fair to say that Chelsea and Barcelona are building a history. Chelsea ousted the Catalans from the tournament two years ago and Barcelona eliminated Chelsea last season en route to winning their second European Cup title. And Chelsea beat Barcelona 1-0 two weeks ago in London.

Afer the game, Chelsea manager Jose Mourinho, who felt his team should have been awarded two penalties, criticised Barcelona for diving.

“I really think it is not easy for a referee to be a referee when the players are minute after minute diving,” Mourinho said.

In fact, defending champions Barcelona have only five points in the group, two behind Werder Bremen, who beat Levski Sofia 3-0. Bremen play at Barcelona on December 5 in a game that could determine which squads advances.

“We have to beat the other teams in our group now,” Barcelona coach Frank Rijkaard admitted. “We have no choice — we have to do it.”
Posted by Unknown at 2:00 AM