Lampard will not be "Blaugrana"

Barcelona board has denied romours about Frank Lampard's move to Cataluña.

The England midfielder has been constantly linked with a move to the Camp Nou in recent months, yet the Catalans' president Joan Laporta has denied such a possibility.

"Lampard is a really good player, one I admire," Laporta is quoted as saying in The Sun. "But I can say that we definitely will not be signing him this season. Our central midfield is closed now."

In fact, Lampard has become a key member of Chelsea side since moving from West Ham United under the reign of Claudio Ranieri, and has constantly assured that he is more than happy at Stamford Bridge.
Posted by Unknown at 11:18 AM 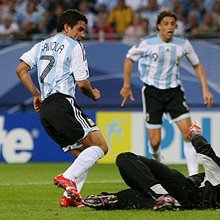 Despite Saviola's good performance at the World Cup, FC Barcelona will be moving Argentina striker.

At least that's what Barcelona technical secretary Aitor "Txiki" Begiristain said: Saviola, whose yearlong loan with Sevilla ended recently, will be offloaded despite impressive displays so far in the World Cup. He has started both matches, scoring in the 2-1 win over Ivory Coast.

"I have to say that Saviola's good play at the World Cup in Germany will not prevent him from leaving our club. This decision is not based on performances over a game or two," Begiristain was quoted as saying by sports daily Mundo Deportivo on Sunday.

"We don't dispute the player's talent. However it is difficult for him to fit in to the idea of football we have."

In fact, Saviola has a year remaining on his contract with the European champion, and he is of interest to Arsenal, according to a British press report on Sunday.

But Begiristain said Saviola's "priority" was to remain in Spain and Barcelona would study offers for the 24-year-old forward, who joined the club from River Plate in 2001 and scored 61 times in three years.

"We'll see which is closest to his wishes and which financially is the best for the player and the club," Begiristain expressed.
Posted by Unknown at 10:55 PM 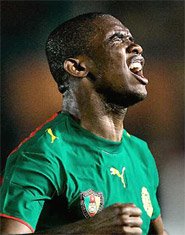 Barcelona's best striker Samuel Eto'o achieved a lot during the last season. Despite his absence at the World Cup, he feels happy. And he has many erasons to feel that way:

He was voted African player of the year for the third consecutive time, being the first African to get a hat trick award. What's more, the African star has emerged as FIFA's third best football player of the year after Barcelona teammate Ronaldinho and Chelsea's Frank Lampard. He won La Liga with Barcelona for the second consecutive time, the UEFA Champions League and emerged with the title of pichichi, which is traditionally awarded to the best scorer in the Spanish tournament. He received several other distinguished awards from Cameroon, Turkey, Israel and Saudi Arabia in appreciation for his firm fight against racism in football.

Speaking at a press conference in Yaounde on May 30, prior to the laying of a foundation stone, Eto'o announced to the applause of his audience that his project is not about a football academy -- but rather football academies. In other words, he explained, Eto'o is going to open as many centers as possible across the nation, so every aspiring youth can have an opportunity to attend.

The player explained that he is concerned with training not only footballers but also "social ambassadors." That's why the recruited team will be actively involved in health and social activities across his country.

This foundation will seek methods of improving the health and medical facilities. In fact, he already announced a symbolic donation to the government, "We already have some ambulances ... to hand over to the government."
Posted by Unknown at 9:07 PM