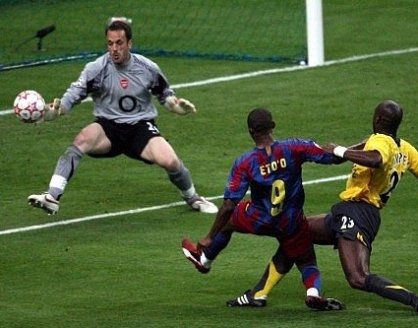 Arsenal and Barcelona were playing the Final in Paris, and with all those famous players on the field, no one would have figured that Juliano Belletti will be the one to make the difference.

Not even him. But the Barcelona defender came on the field with 19 minutes to go Wednesday and soon scored the deciding goal to give his team a 2-1 victory over 10-man Arsenal to win the Champions League.

We must remember that the Gunners, which played with 10 men from the 18th minute after goalkeeper Jens Lehmann was red-carded, took the lead in the 37th at Stade de France when defender Sol Campbell headed in the first goal.

African best player Samuel Eto'o tied the match for Barcelona in the 76th minute, and Belletti scored the winning goal in the 81st.In that play, Henrik Larsson found Belletti on the run, and the Brazilian charged through the English defence and sent his angled shot off replacement keeper Almunia and into the net for his first goal in a European competition.

"Scoring a goal in the Champions League is really hard for a full back," Belletti claims. "I thought this afternoon that perhaps I would have played, but I knew it was difficult. The Champions League is for all the persons who don't appear in the press. It is for everyone."
Posted by Unknown at 10:03 AM

Barcelona travelled to Andalucia without eight of their most influential players. This was taken advantage of by Sevilla, who took a secure lead with goals from Alves Daniel in the 22nd minute and Aitor Ocio in the 76th.

It's important to notice that Barcelona came back through Santiago Ezquerro in the 41st minute and Sylvinho in the 43rd. However. Sevilla had some energy left and Kepa got the winning goal in the 76th minute.

We must mention that Gabri was sent off for the visitors in the dying minutes, leaving Barcelona with just ten players.

Sevilla are now fourth, which gives access to the Champions League third preliminary round. The Andalucians share this position with Osasuna, as both have 65 points. On Tuesday, Sevilla face Real Madrid while Osasuna host Valencia.
Posted by Unknown at 2:25 PM 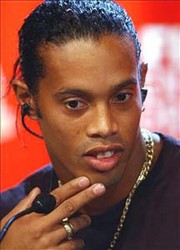 The best player of the squad, Ronaldinho says that having the chance to win trophies such as the Champions League is precisely the reason he joined Barcelona three years ago.

"When I came here my objective was to win important competitions like the Spanish league and the Champions League and now I am very close to realising that dream," the Brazilian said on Wednesday, a week before his side meet Arsenal in the final match.

"Before I came here there were other teams that were interested, but I wanted to look for a club and a place which I could adapt to rapidly and one that was better for my career.

"I'm really happy that I made that decision. I'm enjoying myself a great deal here."

The 26-year-old Brazilian joined Barcelona from Paris Saintt Germain for a fee of $25 million in 2003 despite interest from rivals Real Madrid and Manchester United.
Posted by Unknown at 8:44 PM