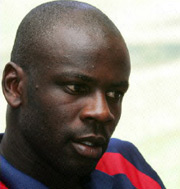 The Italian scandal is over for him. French player Lilian Thuram has passed a medical and signed a two-year contract with Barcelona to enhance th soccer power of the European Champions.

"I am absolutely pleased. To play at this club is the best thing that could happen to a footballer," Thuram told the club's website.

According to unofficial sources, Barcelona have paid troubled Serie A club Juventus five million euros for the player.

We must keep in mind that Thuram has won a record 121 caps with France and announced his international retirement after losing in the World Cup final match to Italy earlier this month.

He was a key member of the French side that won the World Cup in 1998 and the European Championship in 2000, and we also know that Thuram can play in the centre of defence or at right back.

French Monaco and italian Parma are some of his former clubs, and Thuram won four league titles with Juventus alongside defender Gianluca Zambrotta, who has also agreed a move to Barcelona from Turin.
Posted by Unknown at 11:43 PM 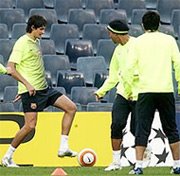 He is back. Brazilian player Edmilson said he felt no ill-effects on his return to training with Barcelona after a knee operation that caused him to miss the World Cup.

"I felt really good and did not notice any pain," the 30-year-old was quoted as saying in Barcelona sports daily publication on Tuesday.

We must remember that Edmilson pulled out of Brazil's World Cup squad after suffering a torn knee cartilage in his right knee when the team were preparing for the championship in Switzerland at the end of May. The midfielder was operated on in Brazil on June 1.

The talented player, who can also play in the centre of defence, joined Barca from Olympique Lyon in 2004 but missed much of his first season at the team after tearing the cruciate ligament in his right knee during a league encounter in October.

It's good to mention that the Spanish and European champions returned to training on Monday with striker Eidur Gudjohnsen joining his new team mates for the first time since his 12 million-euro ($15 million) move from english side Chelsea.

"I know I've come to a really good team where there are a lot of quality players," said the Icelandic international. "I know that I won't be playing every game, but I'm determined to win myself a place in the squad."
Posted by Unknown at 3:40 PM 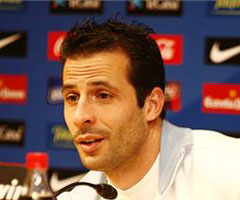 The midfielder, who was dismissed by French coach Domenech for the World Cup, will sign a new deal on Wednesday.