Real Madrid was bigger that Barcelona at the Nou Camp 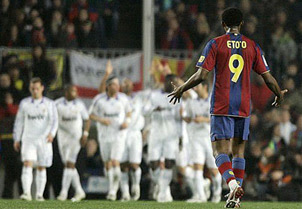 Julio Baptista netted an important goal and gave Real Madrid a 1-0 triumph over Barcelona on Sunday and a seven-point edge at midseason in the Spanish La Liga.

Real Madrid (13-2-2) won for just the third time in 24 years at the Nou Camp stadium, taking a big step toward repeating as league champions in the process.

Even though both teams created plenty of chances, it was Baptista's perfect half- volley that was the difference. Following a beautiful give-and-go with Ruud van Nistelrooy, Baptista one-timed a shot into the upper-right corner in the 36th minute.

In fact, Julio Baptista and Van Nistelrooy - whose eight goals is tied with Raul for the team lead - worked the give-and-go with consecutive one-touch passes.

Van Nistrelrooy's return pass got Baptista just enough space to unleash a shot that Barcelona keeper Valdes had no chance to save.

Barcelona (10-3-2), which was without leading scorer Leo Messi, never answered but had a few solid chances. Blaugrana striker Samuel Eto'o had his best chance in the first half, but was denied on a one-on-one chance against Real Madrid's Iker Casillas.

Barca's Ronaldinho Gaucho also had a great chance in the first, but his shot directed inside the right post was saved by Casillas, who finished with six saves.

Young substitute Bojan Krkic was denied by Casillas in the 83rd, and Yaya Toure shot wide off the ensuing corner for Barcelona.

Samuel Eto'o had another chance in the closing minutes, but Real Madrid defender Pepe deflected the shot wide.

It's important to say that Barcelona holds a slim one-point edge on Espanyol, and Villarreal (two points back) and Atletico Madrid (three points back) are also on its heels.
Posted by Unknown at 4:11 PM