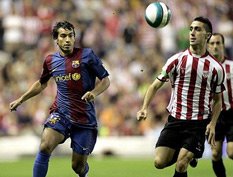 It was good to see the team perform like this. New striker Eidur Gudjohnsen and Javier Saviola scored to help Barcelona beat 10-man Athletic Bilbao 3-1 and take a three-point lead in the Spanish league on Saturday.

The skillful Saviola hadn't scored a league goal for Barcelona since 2004 as he was on loan to Monaco and Sevilla for the last two seasons.

In fact, Bilbao took an early lead in the fifth-round game at its San Mames stadium through Fran Yeste but was then hit by the 19th-minute ejection of left back Javier Casas, and an own-goal by Ustaritz Aldekoaotalora just before the interval.

Barcelona, which is unbeaten this season, has 13 points, while Real Madrid and Valencia have 10 points. Sevilla and Atletico Madrid have nine. Bilbao stayed 18th with just two draws from its opening five games.

We must remembert that Bilbao's new president Ana Urkijo — the first woman to take charge of the club — attended her first game in the role. Urkijo replaced Fernando Lamikiz, who resigned on Wednesday in the face of criticism of his running of the team.

Barcelona players took the field wearing green T-shirts bearing the message "Cheer up, Samu" in Catalan, dedicated to Eto'o. The Cameroon striker tore the meniscus in his right knee during Wednesday's Champions League game with Werder Bremen and is expected to be sidelined for five months.

Midfielder Yeste scored with a meaty volley in the 11th minute from a cross from the left by Fernando Llorente which took a deflection off Barcelona defender Rafael Marquez.

Finally, Gudjohnsen was replaced 10 minutes after his goal by Argentina's Saviola, who also furthered his claims for a first-team place in the absence of Eto'o by scoring. This three points are really important.
Posted by Unknown at 11:17 PM 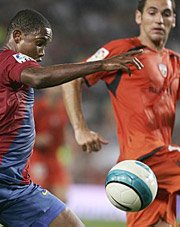 Samuel Eto’o proved that he is the most important striker in Barcelona's squad. In order to make it clear, he scored two and set up another to steer the Spanish champions to a classy 3-0 triumph against Osasuna at the Nou Camp on Saturday.

The Cameroon star put his side in front with just over a minute on the clock, added a second after racing on to a clever lofted pass from midfielder Deco and set up Argentine teenager Lionel Messi for the third before the half was up.

In fact, this win made it two wins out of two for the Catalans, who begin the defence of their Champions League crown at home to Bulgarian side Levski Sofia tomorrow.

We must mention that Valencia also made it two from two after an early goal from Spain striker David Villa earned them a gritty 1-0 win away to Atletico Madrid.

Current Champions Barca got off to a dream start in front of their home fans with a beautifully fashioned goal.

Ronaldinho Gaucho skipped down the right flank towards the area and exchanged an intricate one-two with Deco before cutting a pass back towards the near post where Eto’o was on hand to stab the ball past Osasuna keeper Ricardo.

The Blaugrana team settled into their usual slick passing game for the next 25 minutes before Eto’o added a second goal to take his tally for the season to three.

The Barca forward hooked the ball over the advancing Ricardo after he had latched on to a deep pass from Deco that had skimmed off the head of an Osasuna defender.

In fact, Eto’o set up his side’s third eight minutes before the break when he snapped up the ball after pressing Ricardo into a mistake as he tried to clear his area.

After that move, he cut the ball back to Messi who threaded a low shot between Ricardo’s legs to make it 3-0.

It's important to notice that new signing Lilian Thuram, who was in the starting line-up in preference to skipper Carles Puyol, gave an assured performance in the centre of the back four, restricting the visitors to just one clear shot on goal two minutes from time. In the end, it was clear that Barcelona had a very good night.
Posted by Unknown at 3:48 PM

This is a very important moment in the club's history. Champions League winners Barcelona have signed a shirt deal with international children's welfare organization Unicef.

Barcelona's president Joan Laporta announced the historic deal in Paris on Wednesday - Unicef's will be the first name to appear on front of the club's jersey.

"Indeed, it's an historic agreement which shows the world our club is more than just a club," said Laporta, who was re-elected as Barcelona president in August.

"It's an initiative with soul. Barca can help the children of the world."

He expressed: "It's an historic moment as it is a prestigious logo and not just a publicity brand.

"I think it's an honour to wear the Unicef logo because it's an agreement without precedent for Unicef as well."

We must keep in mind that founded in 1899, Barcelona have always resisted the temptation to have a paying shirt sponsor, although the club has advertised Catalan station TV3 on the left sleeve since 2005.
Posted by Unknown at 2:04 PM