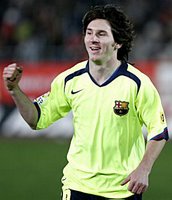 Barcelona FC got an unquestionable 3-0 victory on Sunday at second from bottom Real Mallorca to go 12 points ahead at the top of the Primera Liga.

Coach Frank Rijkaard's saw his team suffer their first defeat in 25 games when they lost 4-2 at Real Zaragoza in the King's Cup on Thursday.

But Barcelona bounced back to make it 14 consecutive wins in the league against a tough Mallorca after Ludovic Giuly opened the scoring six minutes before the break.

The best of the night was Argentine striker Lionel Messi, who came off the bench to make sure of the points with two goals after Mallorca had defender Eduardo Tuzzio sent off in the 72nd minute.

It's good to mention that Barcelona have 52 points from 21 games. Second-placed Valencia are on 40 points after they scored twice in the last seven minutes to earn a 2-2 draw at home against Zaragoza.

Sweden forward Henrik Larsson, deputising for leading scorer Samuel Eto'o who is with Cameroon at the African Nations Cup, had three opportunities to open the scoring for Barca before Giuly struck in Mallorca.

After that, Deco picked out the Frenchman's diagonal run behind the defence with a long pass which Giuly controlled and fired low into the corner.

Also, Silvinho fed Messi from the left flank in the 75th minute, and after dribbling into a crowded area the youngster fired low into the far corner.

Just one minute later he proved he was fallible as he skied the ball over an open goal.

But in the 81st minute he made no mistake from Ronaldinho's pass into the area, as he raced through and lifted the ball over the advancing Miguel Angel Moya.
Posted by Unknown at 2:28 PM 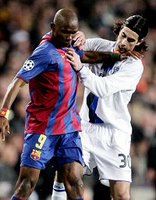 Barcelona forward Samuel Eto'o has again played down reports linking him with a move to reigning Premiership champions Chelsea.
Blues coach Jose Mourinho made no secret of the fact that he wanted to sign the Cameroon international hitman during the course of last summer, when it appeared that Hernan Crespo will be remaining in Italy with AC Milan following a successful season-long loan spell.

But, a deal failed to materialise with Eto'o stressing that he was happy to remain in Spain with the Catalan giants, but this has not stopped a fresh bout of speculation from surfacing.

The player, who scored a hat-trick for his country against Angola in the 3-1 African Cup of Nations win on Saturday, has again played down the link has vowed to concentrate on Cameroon's cup campaign.
Posted by Unknown at 7:47 AM

Barcelona got their 17th consecutive win in all competitions on Sunday, coming from behind to defeat Athletic Bilbao 2-1 at home in the Primera Liga.

Ronaldinho shot a penalty kick to make the first in the 36th minute and Argentine forward Leo Messi added the second in the 51st minute.

Bilbao, who made like hard for the blaugranas, took a 16th minute lead through Fernando Llorente but Ronaldinho equalized from the spot after Amorebieta handled.

It was the Ronaldinho's 11th goal of this season and fifth from the spot.

Messi's goal came when he followed up to steer the ball home after goalkeeper Inaki Lafuente had parried a volley from Mark van Bommel.

As we know, Barcelona had Deco sent off in the final minute after he clashed with Carlos Gurpegi. As tempers frayed Deco continued to protest after being shown the red card and Barcelona coach Frank Rijkaard had to escort him off the pitch.

This victory confirms Barcelona as the runaway leaders in Spain at the halfway point of the season, as they are in the top spot with 46 points, seven ahead of second-placed Osasuna.

The Navarrans fell 2-0 away at Valencia on Saturday, who look like the side currently most likely to mount a challenge despite being 10 points adrift.
Posted by Unknown at 9:05 PM

Barcelona beats Espanyol in their 11th win in a row 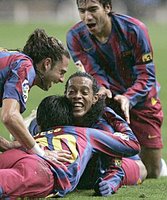 Goals from Deco and Samuel Eto'o gave FC Barcelona their 11th consecutive victory in the Spanish League as they got a 2-1 victory at city rivals Espanyol in La Liga on Saturday.
The visitors almost went ahead in the 20th minute. Then, Lionel Messi picked out fellow Argentinian Juliano Belletti with a superb through pass but the full-back was denied by a fine save from Carlos Kameni.

Deco scored the first strike for the blaugranas. Then he was taken to the hospital after a 58th-minute collision of heads with his teammate Thiago Motta that caused him to briefly lose consciousness. The Portuguese midfielder was just suffering from a slight concussion.

FC Barcelona made 43 points, and Osasuna, which was to face Racing Santander on Sunday, has 38. Deportivo is tied for third with Valencia, which was to visit Atletico Madrid on Sunday. Both squads have 32 points and identical goal differences.

The Catalan squad, which has lost only once in its 18 league games this season, comfirmed its lead in the 47th minute when Samuel Eto'o took full advantage of Ronaldinho Gaucho's pass by steering the ball past Kameni.

When the clock showed the 60th minute, the rivals halved the lead when Raul Tamudo controlled Fredson's crossfield ball and lifted it over advancing goalkeeper Victor Valdés.
Posted by Unknown at 1:02 PM

FC Barcelona are the leaders of Spanish League and they can extend their winning streak to 15 games in all competitions with a victory at city rivals Espanyol on Saturday.

Ronaldinho's team broke the club record last month and returned from the winter break to continue their run with a 3-1 win over third division Zamora in Tuesday's King's Cup first leg tie.

The good thing is, the players recognise that trophies and titles matter more than records. "We could win 20 or 25 games consecutively but if you don't win anything it would all be in vain," Brazilian defender Edmilson told a news conference.

"We must keep our heads clear and focus on the real goals. With each match that goes by we need to be more and more attentive.

"We still have five months to go which are crucial for the club and we need to be focused to complete what could be an exceptional season."

The rivals, Espanyol, are three points above the relegation places in 14th, and they remain unbeaten in their last five games in all competitions.

Second-placed Osasuna, two points adrift of the blaugrana team, will seek to extend their 100 percent home record to 10 consecutive victories when they entertain Racing Santander on Sunday.
Posted by Unknown at 10:54 AM