Barcelona crush Gimnastic 3-0 with another good night of Saviola 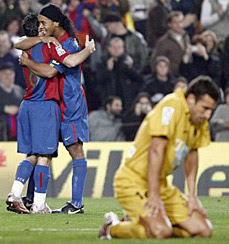 Despite they hava a match in hand -against Real Betis to be played in Sevilla on Wednesday- Barcelona managed to get the first place of the table on goal difference last night with a 3-0 derby victory against Gimnastic at the Nou Camp.

It was another good night for Rijkaard's players. And it's alos fair to mention that the rival Gimnastic were really weak. In fact, they showed why they are currently bottom of the table and favourites for an early return to the second division. In-form forward Javier Saviola notched his seventh goal in four games in the 18th minute, slotting home from ten yards out after some sloppy defending.

However, it took hour for Giuly to make the points safe, although his shot seemed to take a deflection off Nastic debutant, Cesar Navas, who had diverted the ball into the French striker's path after Gudjohnsen's header rebounded off the crossbar.

It's good to mention that Andres Iniesta, who replaced an out-of-sorts Deco early in the second half, wrapped up the scoring a couple of minutes later, firing home from the edge of the box after Ronaldinho Gaucho had been dispossessed.
Posted by Unknown at 10:41 PM Striker Javier Saviola made a great game and scored twice to help FC Barcelona win Alaves 2-0 in a first-leg, fifth-round match of the Copa del Rey on Wednesday.

Indeed, the Argentine player struck the first in the 57th minute and doubled his tally with a header 23 minutes later to make Barcelona a clear favorite to reach the quarterfinals of Spain's knockout tournament.

We must consider that the European and Spanish champion, which rested a host of players including Ronaldinho Gaucho and Deco, hosts Alaves in the return leg next week.

But it's also important to say that Alaves had defender David Coromina ejected after halftime.

During the second part of the game, Alaves supporters caused disturbances to protest at the running of the club by president Dmitry Piterman, a former United States triple-jumper. It was a tough moment for everyone. Even some officers had to stop the angry fans.
Posted by Unknown at 10:27 PM