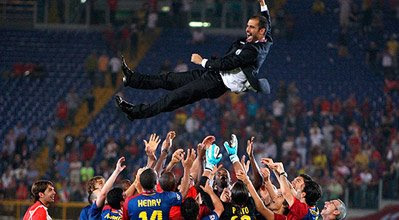 Total joy for every cule fan. Barcelona played a game for the ages, a near-flawless Final that saw it defeat reigning English, European and world champion Manchester United, 2-0, to win the desired UEFA Champions League.

Showing yet again why it is regarded as the most spectacular football team on the planet, Barcelona put on a display of ball-possession and passing skills that left Manchester mesmerized.

Manchester Boss Alex Ferguson's footballers, who were trying to become the first in 19 years to successfully defend their European title, were left chasing shadows. Twice, the shadows escaped and punished them. The goals came from two continents away.

The first, in the 10th minute, was provided by Cameroon's Samuel Eto'o, who danced past defender Nemanja Vidic and fired a shot from close range that went in off the hand of Manchester United's Dutch goalkeeper Edwin van der Sar.

The second, in the 70th minute, was scored by Argentina's Lionel Messi, who soared high into the air and headed Xavi's pinpoint cross into the back of the net, with Van der Sar nowhere near the ball.

It was the third triumph for Barcelona, which also won the trophy in London in 1992 when it still was known as the European Cup, and in Paris in 2006.

This Barcelona team, however, is a class above even its illustrious predecessors. Combining self-belief with skill, talent with tenacity, it has swept all before it in the 2008-09 season, netting a record haul of goals in the process.

With Wednesday's victory, Barcelona achieved what no Spanish team before it had done, completing the triple by winning Spain's Primera Liga, the Copa del Rey, or King's Cup, and Champions League.

It achieved all that under 37-year-old rookie boss, Josep "Pep" Guardiola, a former Barcelona ball boy and a starter on the 1992 European Cup-winning team.

Messi and company held sway throughout. The Argentine star, the tournament's top goal scorer, is now almost certain to take over from United's Cristiano Ronaldo as the FIFA world player of the year.

The celebratory scenes inside the Olympic Stadium were bittersweet for the Manchester United supporters, who had watched their team triumph in Moscow only 12 months earlier.

It was a commanding performance by Barcelona. After the final whistle, “Titi” Henry paraded around the stadium with the trophy on his head.

"I've been waiting so long to get this title," Henry said to a Britain TV Channel. "The last five minutes were the longest of my life. You never know what can happen. We were playing against the best team in the world."

Manchester United had come back from the dead to snatch the European Cup from Bayern Munich's grasp in 1999. This time, however, Ferguson's team, despite the second-half addition of Carlos Tevez and Dimitar Bebatov to an attack that already featured Ronaldo and Wayne Rooney, had nothing left in the tank.

The loss ended the Red Devil's record 25-game unbeaten run in the competition. "It was a killer first goal and they used it very well," Ferguson stated. "We have to accept we've been beaten by a better squad."
Posted by Unknown at 7:04 AM