Important victory against Celta in the opener 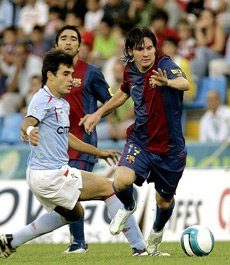 FC Barcelona started their defence of the Spanish league title with a dramatic 3-2 vicotry Monday at hapless Celta Vigo. Their first game of the season was faced without Ronaldinho.

"It was a heart-stopping game," Barcelona coach Frank Rijkaard admitted. "I think we just about deserved to win, but Celta made things really hard for us."

It's important to mention that the late win leaves Barca second in La Liga behind Getafe, who surprisingly won 2-0 Sunday at Osasuna.

A tight first half in Vigo saw few chances for either side. Five minutes before the break, Fernando Baiano opened the scoring for Celta after Barca goalkeeper Victor Valdes had spilled a previous shot.

Then, Barca came out for the second half breathing fire and quickly turned the score around.

In a very good move, Samuel Etoo made it 1-1 with a shot from the left. It was the minute 55, and four minutes later Lionel Messi put Barca ahead from a similar position.

In the 65th minute, Gustavo Lopez made it 2-2 for Celta after the shaky Catalan defence failed to clear a free-kick.

However, Barca refused to settle for the draw and laid siege to the Celta goal, encouraged by the sending-off of local midfielder Jose Iriney.

The pressure paid off in the 86th minute, when Gudjohnsen - who had come on as a late sub - made it 3-2 with a powerful shot. It was a really good result in order to gain confidence.
Posted by Unknown at 1:41 AM 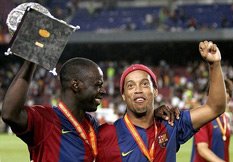 The season is about to start but Barcelona already won an important title: they are the Spanish Super Cup Champions after defeating Espanyol 3-0 in the second-leg of the Final on Sunday.

It's important to mention that a goal from Xavi and a brace from Portuguese international Deco at Nou Camp gave Barcelona a 4-0 aggregate victory over the King's Cup winners.

It's also fair to say that Ronaldinho Gaucho's magic helped stun the visitors with an early opener.

The Brazilian talent bedazzled Espanyol defender Sergio Sanchez before sending an inch-perfect cross to Xavi who headed home the opener three minutes into the match.

And nine minutes FC Barcelona were up by two after some brilliant teamwork.

Brazilian defender Belletti raced down the right flank after connecting with a deft through pass from Xavi. The player cut back with a baseline pass to Deco who drilled home the second for Rijkaard's side.

Once again Deco connected with a Belletti cross to add Barcelona's third goal with a brilliant bicycle kick on the hour mark. It was the most spectacular moment of the encounter.

We must remember that this win gave Barcelona their second successive Super Cup title and seventh overall, matching the record of rivals Real Madrid. Good for them.
Posted by Unknown at 2:20 AM 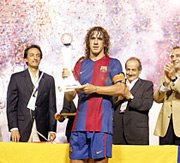 In a very good game, Ronaldinho and Eidur Gudjohnsen both scored as FC Barcelona recorded a convincing 3-0 win over UNAM Tigres in Mexico for their second victory in the pre-season campaign.

We must keep in mind that a number of first team players have only trained for a few days, but the majority were given a run out as Barelona proved that they are as strong as ever. Coach Frank Rijkaard did use a number of youngsters as he fielded 22 players in the win. The Blaugrana's Mexican duo Rafael Márquez and Giovanni dos Santos were named in the starting line-up and were warmly applauded by the home supporters in a packed Estadio Universitario in Monterrey.

The Catalan team scored 6 minutes into the match following a free kick by Mexican Rafael Marquez, who plays for the Spanish team. Defender Marquez hit a soft ball past the Tigres' barrier into center of the crease where Balderas tried to clear the ball but kicked it into his own net.

And in a very good move, the second goal was scored with a free kick by Ronaldinho. At the 70th minute, the Brazilian sent the free kick over the Tigres' barrier and beyond the reach of the goalie into the net.

Ronaldinho Gaucho also assisted in Barcelona's 3rd goal at the minute 77. Indeed, he slipped a pass to Eidur Gujohnsen who put it past the Mexican goalie.

"This victory is positive because we won and managed to get almost all our players in the game," Frank Rijkaard expressed in the end of the game. "The Tigres had bad luck with their definition, but for us it was an interesting match and we had to work a bit."
Posted by Unknown at 1:25 PM