Rijkaard is happy with the victory 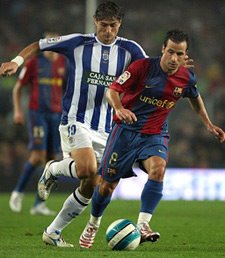 Barça's coach Frank Rijkaard feels his squad is back on course after watching them bounce back from successive defeats with a second win in a row.

Indeed, the latest in a 3-0 win over Recreativo Huelva at the Nou Camp has tremendously boosted the players' morale and offered fresh impetus of a title-winning season.

We must say that the comfortable triumph on Saturday, secured courtesy of a Ronaldinho brace and a strike by Xavi, kept Barca top of the Primera Liga table, two points clear of rivals Real Madrid who are third.

Despite those arguments, for Rijkaard, it will have restored the badly-needed confidence in the team after defeats against Chelsea and Real Madrid in the space of a week.

They defeated Badalona 2-1 in midweek in the Copa del Rey but the convincing win over Recreativo would have provided the Catalan giants with a much-needed fillip ahead of their crucial Champions League tie against Chelsea tomorrow.

"I have seen an important improvement in the team and we must continue working in this way," Rijkaard expressed after the match.
Posted by Unknown at 7:54 PM

Puyol will play against Madrid despite injury 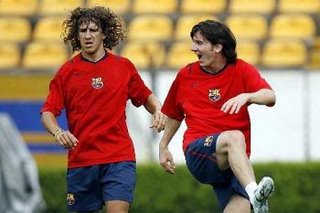 These are good news for Barcelona. Their captain Carles Puyol will play in this weekend's league match against Real Madrid despite a back injury.

The footballer came off in the 74th minute of Wednesday's 1-0 Champions League defeat to Chelsea at Stamford Bridge.

"It's just that in the first half I received a blow in my back and then my right leg started hurting," Puyol told a local newspaper.

It's important to know that after six Spanish league games, Barcelona leads with 16 points, five more than fifth-place Real Madrid.
Posted by Unknown at 10:25 PM

Barcelona is after Australian Lucas Neill

There's an australian target in the club. Barcelona assistant coach Johan Neeskens has admitted that the club is still interested in Blackburn's Lucas Neill.

In fact, the full back has impressed for Australia during the World Cup this summer and has been linked with a host of clubs. Blackburn however hung on to him past deadline day.

Neill is in his final contract year, and Blackburn might try to sell him in January. Liverpool and Milan already expressed interest, and Barcelona now joined them.

"I can say that we have signed some great defenders, but things can change in a year and I know that Frank Rijkaard is following this player very closely," Neeskens expressed.

We must keep in mind that Barcelona already signed Zambrotta and Thuram during the summer, but are apparently still looking for options.
Posted by Unknown at 8:32 PM