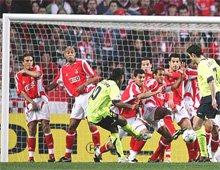 Barcelona went to Portugal in order to defeat Benfica and assure a place in the semifinals. But the local team had enough power to hold them to a 0-0 draw. Ronaldinho and Eto'o couldn't break the deadlock.

The Spanish side had a string of opportinities to score, but a mix of poor finishing and stubborn defending kept Benfica in with a chance of springing a surprise in the return leg of this Champions League quarter-final next week.

Local keeper Moretto de Souza performed a double save from Ronaldinho Gaucho, initially parrying his fierce drive before tipping the rebound over the bar. That was an important moment of the game.

Samuel Eto'o, Ronaldinho and Mark Van Bommel shot many times to beat Benfica, but they were not precise enough.

In the second half, Fabrizio Miccoli replaced Laurent Robert. With this decision, Benfica's attack immediately improved.

In the 80th, Sabrosa got behind the Barcelona defense but Valdes rushed out to stop him.

Giorgos Karagounis then managed to hit the Barcelona post with a free kick from 25 meters in the most dangerous move of the last part. The game was esciting indeed, but it wasn't a good result for Barcelona.
Posted by Unknown at 4:43 PM

With all the speculations about Thierry Henry going to Barcelona, Samuel Eto'o was asked by the press to give an opinion.

What the press didn't know is that the two strikers are very good friends. After this week's victory over Getafe, Eto'o said in public: "It's ridiculous people are saying I'll be upset if Thierry Henry was to join us.

"They say I'd be upset because he'd take my place. But how can I be angry with my great friend Thierry?!!"

Now we know that when Eto'o suffered racial abuse from Real Zaragoza fans last month, it was the French striker who sent him a series of SMS messages in support of the Cameroon star. A really good gesture.
Posted by Unknown at 11:42 PM

African smile in victory over Getafe

Samuel Eto'o was looking forward to score in this game. It was a special occasion since he was just one goal away from the 100 goals mark in the Spanish Football. And he did it twice. With these goals, Barcelona got an important victory over Getafe 3-1 and they're closer to a second straight title.

In the very beginning of the match, Nano Macedo had given the visitors a fourth-minute lead today, and Anibal Matellan put the ball into his own net to tie the match.

And the Blaugranas broke clear from the resulting corner and Eto'o put the finishing touch to a stunning passing move to give the Catalans a 2-1 lead.

In fact, Deco gave a good pass to Mark van Bommel on the right, the Dutchman slipped a pass to Eto'o who exchanged a slick one-two with Giuly and then fired home for the 100th league goal of his career. He scored another goal 16 minutes later, and Barcelona assured the victory.

Barcelona, Spain's second-most-successful squad after Real Madrid, has 67 points from 29 of 38 games. Madrid has 14 fewer points and has played one a less match. Valencia and Osasuna are a further point back.
Posted by Unknown at 8:58 PM

Nine-man Barcelona were shocked 2-1 by a hard Osasuna on Sunday in one of their worse nights on the pitch this season.

Ronaldinho and Samuel Eto'o couldn't satisfy the fans, in a game that will everyone wants to forget.

Barcelona had the opportunity to put more daylight between them and chasing teams Real Madrid and Valencia but the gap remains nine points.

But a mistake by Barca keeper Victor Valdes gifted Osasuna the opening goal for Valmiro Lopez Valdo, then Francisco Punal knocked home a 59th-minute penalty shot. Henrik Larsson gave Barcelona some consolation with a goal after a deft through ball by Ronaldinho Gaucho with 18 minutes left.

Worse was to come for Barcelona who finished the match with nine men after Thiago Motta was sent off with a red card.
Posted by Unknown at 9:02 AM 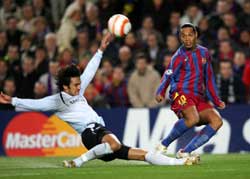 A magical moment of Ronaldinho gave Barcelona a well-deserved place in the Champions League quarter-finals after they drew 1-1 with Chelsea here on Tuesday in their last 16 second leg match and a 3-2 victory on aggregate. It was a sweet revenge for last year’s 5-4 aggregate defeat by the Premiership champions and left Liverpool as the only English side to have ever beaten the Catalan giants at home and that was 30 years ago.

In fact, Ronaldinho’s sixth goal in seven Champions League matches came just over 10 minutes from time while Chelsea got a generously awarded penalty in stoppage time as Giovanni van Bronckhorst was adjudged to have fouled John Terry though it looked as if he had got the ball. Frank Lampard slotted home the penalty but it was all to no avail as the referee blew the final whistle almost immediately. “The best one did not win,” said Chelsea coach Jose Mourinho, who must have had little cause for complaint as his side had never really threatened to pull off the victory. “Eleven against 11 we would have won (he said referring to the sending-off of Chelsea’s Asier del Horno in the first leg). “The first leg we lost an important piece and we had to come here 2-1 down. If we had a bit of luck and scored before the last minute it could have changed us mentally and it would have been different.”

We can say that Mourinho even had a go at the referee Markus Merk. “As it was after the penalty the referee did not play another second.” But Barcelona coach Frank Rijkaard focussed on his team. “The team pulled off a really good performance,” said the former Dutch footballing great. “We stayed focussed till the end and although we made some tactical mistakes our defenders held the line really well.” Barcelona’s veteran Swedish striker Henrik Larsson said Chelsea had played well but there was no doubt who deserved to progress. “We showed we were the better side for the two legs,” said the 34-year-old.

“We tried to play our normal game and try and not give them too much space behind us as they are quality players. We tried to fill the gaps. I think in the first-half we had everything under control and it meant as time went on we were even more in control.” Chelsea forward Didier Drogba, who was sent-off in the match in Barcelona last year, had a glorious opportunity to open the score in the 20th minute but he directed his header tamely into the hands of Victor Valdes. The Ivorian striker had not been too far away 10 minutes earlier from getting to a delightful cross by Joe Cole but it flew inches over his head. Chelsea’s physical tactics had an effect on the more elegant style of the Barcelona side and in the end it did for Lionel Messi who pulled up with an injured hamstring after a foul by William Gallas and had to be replaced by Larsson.

Gallas was fortunate not to be called for a penalty after barging over Ronaldinho just before the half hour mark but in truth Barcelona had yet to test Petr Cech. Carvalho - whose controversial holding of the Barcelona goalkeeper last year resulted in Chelsea’s decisive goal - could also have been penalised for a penalty after dragging Edmilson to the ground inside the penalty area. However it was Valdes who was again tested as Arjen Robben cut in from the right in the 38th minute but the Barcelona keeper got down well to save his shot and not to let it rebound into the path of Drogba. Chelsea again went close a minute from the end of the first-half as John Terry won the ball in the air and Cole produced an inspired overhead lob which beat Valdes but landed on top of the net.

In the end, Chelsea manager Jose Mourinho made a double switch in the 59th minute bringing on Eidur Gudjohnsen and Crespo for Drogba and Damien Duff. However it was Barcelona who were on target shortly after that as Samuel Eto’o at last got a shot in that forced Cech to beat it away and Terry headed it to safety. Hernan Crespo nearly made a dramatic entrance as on the hour Cole’s expertly directed cross was met by the Argentinian at the near post but his shot trickled wide.
Posted by Unknown at 9:48 PM