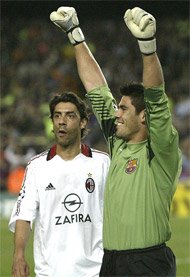 Barcelona and AC Milan tied 0-0 and the Spanish team advanced to the Final game in Paris against Arsenal. The Blaugrana side took the win over Milan with a measured celebration rather than unbridled euphoria. They want to accomplish higher objectives.

"We accomplished our goal in this match," was coach Rijkaard's statement on his side's achievement in qualifying for their first final in 12 years. "But this is not the end, we want to go to Paris and win the title."

In fact, Barcelona have never missed a European season in the 50 years since continental competition began. However, they have won the Champions League trophy only once.

"Our dreams are a step closer to become true" said striker Samuel Eto'o. "We had to suffer to get here but it will be nothing compared to the joy if we can win the final. We all want to get the victory and dedicate it to the fans."

The African striker is convinced that past disappointments, such as last season's elimination by Chelsea in the first knockout round, have given the side a harder edge that has enabled them to beat the English champions and Milan this time round.

"We learned last year that we have to know how to defend a result and that's what we have done. We've learned how to struggle to achieve what we want."

Even though hos team dominated for long periods of the game against Milan on Wednesday, they certainly had to sweat it out to beat the Italian side.

Eto'o and Henrik Larsson were denied what looked like certain goals by some top-class saves from Brazilian goalkeeper Dida, while defender Juliano Belletti spurned a gilt-edged chance with an air-shot when the goal was at his mercy.

We must consider that Milan looked to have forced the tie into extra time when Andriy Shevchenko headed home midway through the second half, just to see the goal ruled out for an apparent foul on centre back Carles Puyol.

But Barca kept their heads and managed to become only the second side to beat Milan in the semi-finals since the European Cup began 50 years ago.

The final match will be an oppostunity to see the two most talented players of the World face to face: Ronaldinho and Thierry Henry.
Posted by Unknown at 5:23 AM 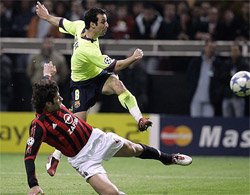 Barcelona edged AC Milan 1-0 and a crowd of 76,883 at the San Siro on Tuesday night just couldn't believe it. French midfielder Giuly score the goal that makes Barcelona dream of Champions League final.

We must say that AC Milan had the better of the first half, Alberto Gilardino hitting the post with a snapshot from a tight angle and Víctor Valdés denying Andriy Shevchenko with a wonderful block shortly afterwards.

However, there was a play that changed everything. In the 57th minute, Ronaldinho Gaucho lifted through a magnificent pass for Ludovic Giuly, who impressed in controlling the ball and then sweeping it past Dida, Milan's keeper. It was an away goal crafted by the gods.

Frank Rijkaard gave the rival credit: "It was an absolutely important result and I want to congratulate my squad. We were playing at a tough venue against a great squad and it wasn't easy."
Posted by Unknown at 11:58 PM 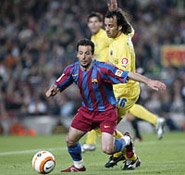 Spain has two teams in the semifinals of the Champions League, and they played on Friday. But this time it was a Spanish League match. Despite it, Samuel Eto'o managed to score the winning goal to help Barcelona beat Villarreal 1-0.

As we said, the match could have been a preview to the Champions League final next month. It's a must to say, though, that both teams had key absentees.

Barcelona was without world class player Ronaldinho, who also missed last weekend's draw against Santander with a right thigh injury.

Carles Puyol was able to play, after Barcelona's successful appeal against his suspension on Thursday. We must remember that Barcelona is set to meet AC Milan on Tuesday in a Champions League first-leg semi-final.

In the other hand, Villarreal, enjoying a sparkling Champions League debut season, will play Arsenal in London on Wednesday.
Posted by Unknown at 9:29 PM

Barcelona FC runs closer to their 18th Spanish league title. The "blaugranas" got a 2-2 draw Sunday against Racing Santander.

This draw keeps Barcelona 11 points ahead of Valencia and Real Madrid - who share second place - with just six games left to play.

It's important to say that Frank Rijkaard's squad now have 70 points from 32 games, while Valencia and Real have 59.

All the scoring in Santander came in an eventful first half. Barca took the lead through Henrik Larsson, but Antonito Perez and Oscar Serrano quickly gave the hosts a surprising 2-1 lead.

African star Samuel Etoo levelled for Barca just before the break. The second half was a more relaxed affair, with both teams appearing to settle for a point toward the end.
Posted by Unknown at 10:27 PM

All Eyes on the Derby 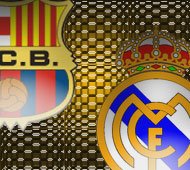 Barcelona is preparing everything to face the classic enemy in the Spanish Derby on Saturday. The will host Real Madrid at the Camp Nou.

Frank Rijkaard claims he will not be resting players for Saturday's big game against Real Madrid in order to save them for next week's Champions League quarter-final with Benfica.

"Everyone who is fit will play, I will not rest players," Rijkaard told sports daily Sport on Friday.

The Catalans are without the injured Rafael Marquez and Edmilson in defence, along with livewire Argentine forward Lionel Messi, for Saturday's game.

It's important to say that Silvinho has been left out of the Barcelona squad for precautionary reasons. In the other hand, captain Carles Puyol returned from suspension and will be able to play.
Posted by Unknown at 1:15 AM