Leo Messi elated with the quality of new teammates 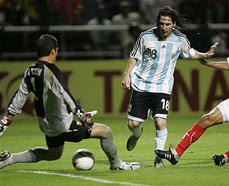 Indeed, Messi is with Argentina for the Copa America, but he has watched from afar as Barça have landed Henry and Toure in recent weeks.

"It cheers me that the club is being reinforced with players of such quality," said Messi. "The signing of Henry is spectacular, he is amazing. And I faced Toure in the World Cup and he is a great player, I remember his huge quality."

On the future of midfielder Deco, Messi added: "He is a key player, who sometimes doesn't get the credit he deserves. He is a player who I would always want in my team. For sure."
Posted by Unknown at 11:02 AM