Saviola must be patient about his future 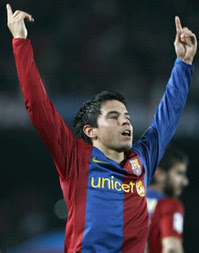 FC Barcelona sporting director Txiki Begiristain is convinced that Javier Saviola must be patient as the club puts together a new contract offer for the Argentine footballer.

We must remember that Javier Saviola was said to be frustrated that no offer had yet been made, but Begiristain has confirmed the Liga champions hope to keep him at the Camp Nou Stadium.

"As we told his agent a month ago, after this break in the Primera Liga we will start work on the offer. We hope that he will study the proposal and will accept it," he admitted.

"In fact, the club is the one who decides when the offer is to be made."

The Argentine forward has come out of the Barcelona wilderness this year to score 12 goals in 21 matches, after having had loan spells at Sevilla and Monaco in the last two seasons.

And his deal with Barcelona ends in the summer but he has said that he will not speak to other clubs until his future at Barcelona is sorted out.

"Out of respect I won't speak about any clubs," the player expressed. "I have not left Barcelona yet and I don't know yet if I will have to leave."
Posted by Unknown at 11:44 PM