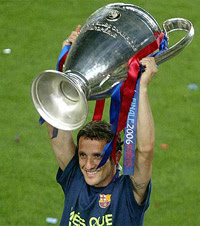 Barcelona FC announced that Brazilian defender Juliano Belletti will not be sold to Milan in January. What's more, Italian press reports claim the Rossoneri have made a €5 million (£3m) offer for the talented player, who scored the winner in May's Champions League final.

We must consider for this situation that the 31-year-old has been ousted from Frank Rijkaard's first-choice XI by Gianluca Zambrotta and Milan are desperate to find cover for the veteran Cafu.

In fact, they have recently targeted Belletti following complications in their efforts to sign Lazio's Massimo Oddo.

However, Belletti's agent and Barça sporting director Txiki Begiristain have both denied any official contact with the Serie A powerhouse.

"We have not spoken with Italy. Our idea is to renew his contract beyond 2008," Belletti's brother and agent Sandro expressed to the media.

Furthermore, we reported Begiristain saying: "I have no idea where the news has come from and I find it very strange, because nobody from Milan has been in contact with us.

"I can say that there is nothing at all in it. Perhaps an offer has been made to them, but nothing has arrived at the club."
Posted by Unknown at 3:05 AM 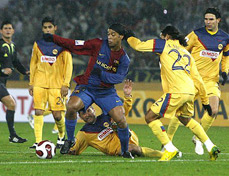 The Club World Championship has now the runner ups decided. After Brazilian team Internacional of Porto Alegre qualified themselves for the finale at the expense of Egyptian formation Al Ahly , FC Barcelona did the same by crushing Mexican squad America with 4-0.

Before this game, FC Barcelona were a little worried because America had been in Japan a little while longer and had more time to acclimatise and the jetlag could pose a problem.

Those fears almost became reality when Argentine striker Claudio Lopez escaped the Barça defense after 5 minutes but his effort was in vain. His action was characteristic for the "Aguilas". It was able to create chances but were never persistent enough to become dangerous.

But it's important to notice that Barcelona were persistent enough. After 11 minutes Eidur Gudjohnssen scored the first goal after Andres Iniesta and Ronaldinho set it up. Rafael Marquez headed the second one against his fellow countrymen after 30 minutes after a cornerkick from Portuguese Deco.

And in the second half FC Barcelona was more playful. Ronaldinho aimed for the top corner in the rebound and scored the third goal while Deco made best goal of the game scoring from a large distance with incredible accuracy.
Posted by Unknown at 8:47 AM 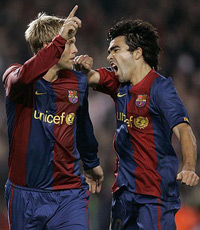 Needing a triumph at home to advance to the second round of the Champions League, FC Barcelona managed to beat Werder Bremen, 2-0, on Tuesday.

Ronaldinho Gaucho gave the defending champions the lead in the 13th minute, sending a free kick under the wall and into the net. Eidur Gudjohnsen added the other in the 18th by sidefooting in a centering pass from French forward Ludovic Giuly.

"It's fair to say that it was a very attractive game and the crowd got right behind us," said Rijkaard.

"I think we played really good in the first half, which was very important, and took the chances which came our way.

"We showed the correct mentality throughout and I am very pleased. You have to fight for it - there are two squad out there. But we did our job and I must congratulate the team," said the Dutchman, unbeaten in European competition at the Nou Camp since taking the job in mid-2003.

In fact, the win gave Barcelona 11 points in Group A, and left Bremen in third place with 10. Bremen will now play in the UEFA Cup.

In the other Group A clash, Chelsea beat visiting Levski Sofia, 2-0, to finish in first place in the group. Andriy Shevchenko put the Blues ahead in the 27th minute and Shaun Wright-Phillips added a second in the 83rd.
Posted by Unknown at 10:57 AM

Only a victory over Bremen will save Barça

FC Barcelona face the game against Werder Bremen with a lot of pressure: only a victory will help them stay alive in the Champions League.

Indeed, another result today would see the Catalan club become the first defending champion to be knocked out of the group stage since the tournament's inception in 1992.

"We don't want to think about that," coach Frank Rijkaard said. "We are preparing to win the game. It realy doesn't help to think about losing, it doesn't cross our minds. We have to go out there and do our jobs and beat Bremen, who are a very strong team."

The "Blaugrana" team has eight points, two behind Bremen in Group A. Chelsea, which also has 10 points, has already qualified from the group stage because of its superior head-to-head record.

It's interesting to see that instead of looking to become the first repeat winner since AC Milan in 1990, a loss or draw would result in Barcelona playing in the UEFA Cup, Europe's second-tier tournament.

"We are only thinking about completing our job and we don't want to think negatively," Rijkaard expressed. "We've had a lot of success, they are a good team. It will be an interesting clash."

As we know, Rijkaard rested several players, including star forward Ronaldinho, who is the joint top scorer in the Spanish league with 10 goals, for last Saturday's 1-1 league draw against 16th-place Levante.

"I'm going to play the same way I always do -- putting more pressure on my shoulders won't help my game," Ronaldinho Gaucho said.

"Only a win will do, so the responsibility is squarely on us, but then it is for other games as well. The most important thing is to win."

Midfielder Rafael Marquez is set to return from an ankle injury, but forwards Samuel Eto'o and Lionel Messi are out because of long-term injuries. Striker Javier Saviola injured his thigh last month and is out.

We must remember that Barcelona, which leads Real Madrid by one point in the Spanish league, has still scored 18 goals in its past six games in all competitions.

However, Barcelona's form in Europe has been shaky since its 2-1 win over Arsenal in April's final, a win that capped a European campaign without a single loss. Its only two win this season have come against winless Levski, and it needed an 89th-minute equalizer from Messi in a 1-1 draw at Bremen.

"The squad is very focused," Rijkaard said. "The added motivation is that Bremen have said they are better than last year and they have pressure themselves.

"I think we have to go out and complete our work -- we can't just think about it, we have to do it."

It can take confidence in its displays against Werder Bremen in last season's group phase, where it won both games, including a 3-1 win at Camp Nou.

"The teams have changed from last year -- both have more experience. Barcelona has the experience of winning it," Bremen manager Thomas Schaaf admitted. "Our footballers are looking forward to the atmosphere and will be inspired by it. But not to go through with 10 points would be a bit hard to take."

"I think we are a good team but, of course, Barcelona are the favourites," Bremen midfielder Torsten Frings said. "Barcelona has more pressure on it than us. They are the champions and one of the best teams in the world, but we have shown our mettle too... and we know a place in the last 16 is at stake."
Posted by Unknown at 10:29 AM